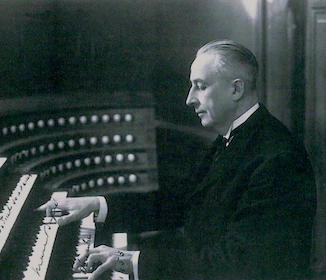 Tobias Frank, Organist at the Lutheran Church of St. Lukas in Munich, has initiated a major project celebrating the 50th anniversary of eminent French composer Marcel Dupré's death. Entitled "Dupré Digital" (available here), this monumental undertaking culminates in 15 online episodes that each focus on various themes of Dupré's tremendous life. In this interview with Vox Humana Associate Editor Katelyn Emerson, Tobias discusses the origins of the project, what to expect, and his connections with the Dupré family.

Tobias, thank you so much for agreeing to this interview. Marcel Dupré and his compositions have had a great influence on your musical life. Do you recall the first time you encountered the music of Dupré? What about this music captured you, leading to such profound interest?

There would be a lot to tell, but I will be brief: Opus 7, the Three Preludes and Fugues, was for me, as for many, the entry into Dupré's musical cosmos. I was also fascinated by the story of his international career. When I performed his De profundis in the orchestral version about ten years ago, I was inspired by the timbres. That experience awakened my thirst for research as I knew that there were many unpublished works from the period in which De profundis was composed. I set out to search for them and something almost like an addiction arose because I kept discovering new sound worlds of Dupré. These began revealing this composer’s personality, an aspect that was completely unexpected to me.

You have brought together an extraordinary group of musicians and scholars for these videos to paint depict M. Dupré through his music, his philosophies, and his legacy. Who is involved in this project? What do you hope to accomplish through their involvement, and the project as a whole?

Dupré wanted to establish the organ as a mainstream instrument. This project aims to portray Dupré as a generally well-founded composer via the veil of the organ. A total of around 50 musicians and interview partners are involved. To underline the value of his music and to classify it in terms of reception history, an illustrious round of people have come together. Some of them are big names in Germany or throughout Europe, such as the Austrian Helmut Deutsch and the internationally renowned song accompanist, Denis Rouger, professor of choral conducting in Stuttgart and former long-time choirmaster at Notre-Dame in Paris. And there are also renowned organists such as Olivier Latry, with his expertise in French music, and Ben van Oosten, Jeremy Filsell, and Robert Quinney, all of whom are known to be experts in Dupré's organ music. We will also hear from former pupils and Dupré's granddaughter, Alice Szebrat.

Over the course of the project, there will also be a guest contribution by Johann Vexo on the Cavaillé-Coll organ in Nancy, whose sound is closely connected to Dupré's earlier music. With Winfried Bönig from Cologne Cathedral, Robert Quinney from the University of Oxford or you, Katelyn Emerson, from the USA, organs will be heard on which Dupré gave concerts. The focus in the choice of instruments was not necessarily to feature typical instruments for Dupré's music, but to show the universal applicability of Dupré's music on different organs. Of course, with some organs you have to make the pieces fit, but with Bach you have to do that, too, after all!

You were connected with the Dupré family to such an extent that you are granted a power of attorney. How did this come about?

In Europe Dupré's works are protected under copyright law until 2042, and his manuscripts can only be accessed with the permission of his legal successors. It took me a long time to get in touch with Alice Szebrat and her twin sister Jeanne Bernard (who unfortunately died in 2013). Since my French is rather mediocre, someone had to translate my request. I then transferred every word of the translation by hand onto the best letter paper and successfully wooed the two ladies, and they finally gave their permission. Since then I have been able to be in contact with Alice Szebrat, fortunately in English.

Compiling the music selections for the ten installments is a massive project. What helped you in selecting repertoire on which to focus for each Episode, and how did you choose the music to be featured?

As already mentioned, I wanted to make the musical spectrum as broad as possible. It was crucial that the works bring something new and that they can be connected to an aspect of his life or his artistic work. Moreover, I didn't want to regurgitate pieces that already exist a hundred times on YouTube or that are available in countless commercial recordings.

Is there a particular progression from episode to episode (should one watch them in order?), or are they intended to be able to be viewed individually and stand alone, if needed?

You have already mentioned that the project comprises 10 installments. The counting of the project is a little confusing, admittedly: there are a total of 10 thematic areas, divided into a total of 15 episodes. All episodes are subtitled in three languages.

I deliberately decided against a chronological structure, instead favoring flexibility. The contents are clear, but the dramaturgical details are constantly in the process of development. This is also due to the fact that content will still be in production until October. For example, I have just returned from interviews in Cologne and The Hague, so it may well happen that I have to insert an episode somewhere in between because there are so many exciting details, as I don't want to overstretch the length of each episode. Through the end of July, the episodes will be posted online every two weeks. There will be a small break in August, then we will resume releasing episodes in September. The first episode can be found here:

One fascinating episode covers the eight-part organ cycle Les Nymphéas, composed for Dupré’s house organ at Meudon and never published by the composer himself. You have edited and are publishing in a new version of this now. Each of these aural depictions is tied intimately with the visual, and you have also chosen to share this cycle in a particularly unique way. Can you tell us your vision for the edition, as well as about particular challenges and considerations it required? What will make this virtual performance especially unique?

I was able to engage eight young musicians to perform the eight sketches online in a weekly rhythm from October onwards. Ben van Oosten will present a short preface to this part of the project. The release dates will soon be available on the trilingual website here. Dupré was inspired by Claude Monet's water lily paintings, which are on display at the Musée de l'Orangerie in Paris. Monet wanted the paintings to be viewed in natural daylight, which is why the exhibition room has a glass roof, and the room is on the axis of the sun. So I had the idea to have eight organists from eight countries perform these sketches following the course of the sun from east to west; the journey begins in Australia and travels via Japan, Russia, Finland, Germany, France, Argentina and the USA.

For the Dupré Digital project, are there particular sponsors or societies whose support makes this possible?

My church, St. Lukas in Munich, is one of the most important cultural churches in Germany, and Dupré Digital is part of the cultural work there. After the finances seemed to be secured, a public sponsor withdrew their commitment at the last minute because they suddenly perceived the project as "too specialized.” Suddenly there was a gap of 20,000 euros — a shock! At this point, the project could no longer be stopped. As Dupré Digital runs until December 15, I am hoping private donations from donors who appreciate the efforts of the project will help close the gap. Municipal and church institutions support the project, as does the Franco-German Civic Fund, and without outstanding voluntary commitment from performers and scholars, this project would not be possible.

In a particular time when so much is digital, which has both benefits and difficulties, what have been some surprising assets and frustrations because of using this medium?

I must confess that user behavior in the digital world is sometimes a mystery to me. A guarantee for high click numbers is usually a photo of a prominent organ case that is posted online through a copy-and-paste process. Creative projects often receive little or no attention. Does this say something about the open-mindedness of the users? Or is it a problem of the algorithm?

In general, the digital medium is ideal for disseminating the content of the project. In the video episodes, you can learn interesting content in a short time, paired with visuals, music, and insights offered through the manuscripts. Showing the manuscripts in particular is cost-intensive, but brings visual added value. You can combine so many different aspects in the video that would be difficult to include with another medium – and it is also important that this project be freely accessible to all.

Your own experiences and studies have been international, including those in the UK as well as your home of Germany. How has this foundation informed your understanding of the international spirit of Marcel Dupré’s music, and how do you think that we musicians, particularly organists, can continue to learn through travel and international study, even as the world grows smaller and we can gain so much information through solely online connections? How has the international nature of the contributing performers and scholars made this project particularly special?

The pandemic has promoted digital forms of implementation, especially in the cultural and educational field; it has become easier to educate oneself via the internet. But still, the live experience is irreplaceable.

As an artist, you should gather as many influences as possible with curiosity and draw the best out of them for yourself and find your own style. You can discover a lot of new music on the internet; you can look over the shoulders of great musicians in close-up; organists can bring an organ of the Bach era or a French cathedral organ into their homes with the Hauptwerk system. But still, the physical experience of, say, a Schnitger organ or an English cathedral organ is much more memorable live, and that's where digital tools reach their limits.

However, the internet has become irreplaceable for building a network.

is the initiator and creative head of Dupré Digital. He is Organist and Director of Music at the Lutheran Church of St. Lukas in Munich, Germany. He is an experienced recitalist and premiered and published several works by Dupré. His CD recordings acclaimed international praise.