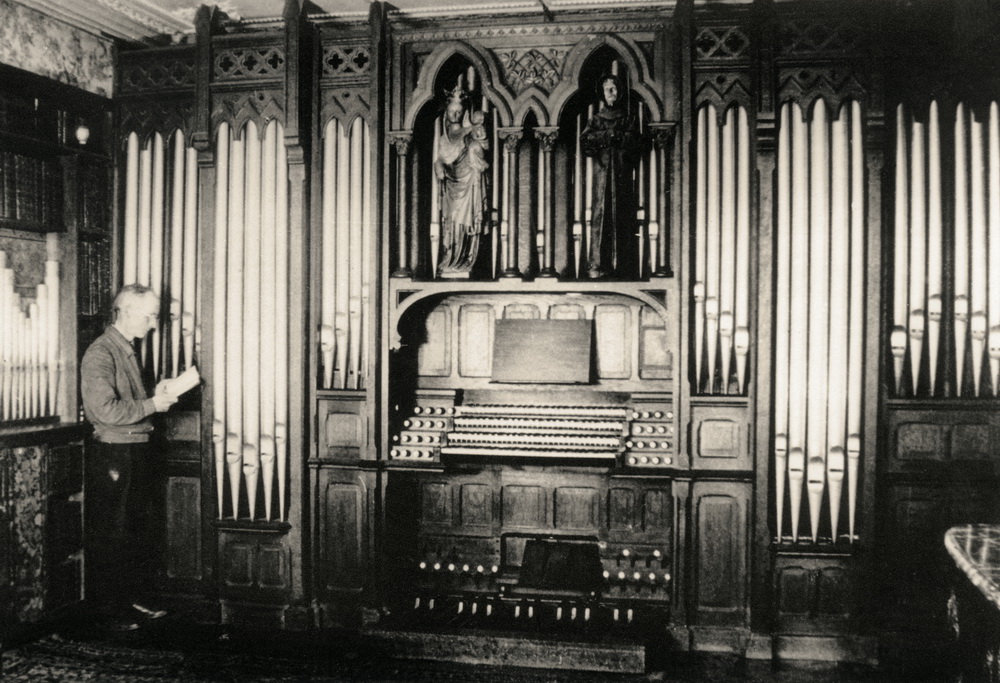 Albert Alain (the father of Jehan and Marie-Claire Alain) next to the family organ in their home.

Albert Alain (the father of Jehan and Marie-Claire Alain) next to the family organ in their home.

James Higdon, Professor of Organ at the University of Kansas, scholar on the works of Jehan Alain, and former student of Marie-Claire Alain, discusses the many aspects of Jehan Alain’s music and his lifelong friendship with the Alain family in this interview with Vox Humana Editor Christopher Holman.

James, many thanks for agreeing to this interview. Among your many accomplishments, you’re known for your specialization in the music of Jehan Alain, and you studied with his younger sister, Marie-Claire Alain. How did you come to meet her?

I was an undergraduate at St. Olaf College, and in the late 1960s my teacher Robert Kendall told us organ students one day that we were going to a recital by an organist that he thought would become important. He didn’t tell us who it was, but took us to Central Lutheran Church in Minneapolis. It was packed, and the organist was Marie-Claire Alain on one of her earlier tours to the U.S. I’d never heard anything like it, and I made it my goal just to meet her. I did have the opportunity several times, and in 1981 the University of Kansas sent me to study with her in France, and she became my teacher, mentor, and friend.

What was studying with Marie-Claire like? How did she teach, and what are some of the most important things you learned from her?

Whether in lessons or concerts, just her presence and personality would help you play better. But she was tough — you didn’t want to come to a lesson unprepared! I sat on international juries with her, and she would keep a pad of paper by her right hand, and every time a student made a mistake she would make a mark. She only wanted fresh ideas, and approached things in a scholarly and musical way. When I studied French Classical music with her, she brought documents with her so we could read them together.

She made it clear that she didn’t want us students to copy her, and she didn’t want us to listen to her recordings. If many of us were playing the same piece of Bach, she wanted them all to sound different, but all still sound like Bach. Some feel that’s a difficult way to teach, but she knew that giving everyone the same tempi, fingerings, articulation, etc. wasn’t a good approach. The most important lesson I have taken away from her is that there isn’t one “right” way to do anything.

Marie-Claire was the first major proponent of her brother Jehan’s music. What insights did she share about his music when you studied with her, and how do they affect the way one plays that repertoire?

Early on, Marie-Claire shared photocopies of Jehan’s manuscripts with me and we would study them. She had insights on every piece. For the recording I have just completed [of the Alain organ works — see below for more], her daughter Aurélie Decourt gave me Albert’s [Jehan’s father] 1942 scores that contain [Albert’s] markings. In that set, Albert made many changes to notes and registrations.

I can’t imagine he made those changes by himself; he probably had other manuscripts of his son’s, or he heard his son play them and would discuss them with him. I based this recording on Albert’s markings, and it’s a great privilege to share a close relationship with the Alain family even today.

In your own study of Jehan’s music, have you developed ideas about performing his music that are different from Marie-Claire’s interpretation?

Yes, and she knew that, but it was okay. For example, she heard me play the Trois Danses, and she said, “you play it very different from me, but I like it!” Again, she didn’t want her students to copy her; she wanted everything to sound authentic and musical. I also studied Jehan’s music with Catharine Crozier, who was also one of the very first people to play that music in the United States.

In my new recording, I’ve based my interpretation not only on Albert’s markings, but also my many years of experience playing these pieces. For me, one of the signs that the literature is good is if one can always find something new and exciting. In playing Jehan Alain’s music, I’m always doing that.

What do you think makes for an ideal organ on which to play Jehan Alain’s music?

First of all, there is no particular “Alain organ.” I have played the family organ that was in their home, and I’ve played the large organs that Jehan knew: the church of St.-Germain, the Jewish synagogue where he played every Friday night, the Abbaye de Valloires, etc., and they’re all completely different! Jehan’s works are not the type of literature that is wedded to the work of a particular organbuilder (such as Widor or Vierne’s music, which was primarily conceived for organs by Cavaillé-Coll). Jehan drew inspiration from many sources: middle eastern music (what he heard in the synagogue); he heard exotic music of all kinds at the Paris Exhibition; he listened to Radio Morocco; and the list goes on. The kind of organ that is perfect for his music is simply a good organ that is very colorful. Thus, this repertoire can be played on all kinds of organs, and some pieces can be played on both piano and organ without any additional adaptation.

Other than a few specific pieces, I suspect many organists know little of Jehan Alain's output. What can organists do to make his music more accessible to the public?

Prior to 1942, only a few pieces of Jehan Alain’s were published. But in 1942, Albert published 22 pieces to memorialize his son — which was no easy task given the political climate! — in a printing run of only 100 copies. And of those pieces, everyone knows Litanies and maybe the Deuxième fantaisie, but otherwise, his works are largely unknown, which is why Marie-Claire, I, and others have recorded them. There are many pieces by Jehan Alain that can be played on any organ, and so I think the best thing is to simply play through the repertoire and choose pieces that fit well in the rest of their program (and there are many, many possibilities!).

How do you teach Jehan’s music to students, and how do you incorporate what you learned from Marie-Claire?

When teaching this music, I talk about Marie-Claire all the time. How does one perpetuate the memory of an important person other than talking about them? I talk about her way of playing the repertoire, and I try to emulate her style of teaching, and I encourage students to play the works of Jehan Alain (though it’s not required).

How would you describe Marie-Claire and Jehan’s relationship? Were they particularly close, given she was around 14 years old when he died at age 29?

That’s always an interesting question. There were four Alain children, and the oldest daughter (Marie-Odile) was killed in some sort of mountaineering accident in 1937. For whatever reason, I think Jehan always took a special interest in his baby sister. For instance, the Complainte à la mode ancienne (from the Cinq Pièces faciles, AWV 35) is all half notes and whole notes, and it contains the inscription “so that Poucette can play the organ at Valloires.” And we know that “Poucette” was Jehan’s nickname for his little sister. I once asked Marie-Claire, “Weren’t you thrilled that your brother wrote a piece for you when you were a little girl?” And she said, “No! I cried because it was too hard for me!”

She talked frequently about hearing Jehan play, and she still remembered his playing in quite some detail. She would recall aspects of registrations, or interpretations. They did have an organ in their home, so it seems likely that she heard Jehan play quite a lot.

Do you have any upcoming projects or publications?

We hosted the American Guild of Organists Pedagogy Conference at the University of Kansas on October 18–21, which included performances by Olivier Latry, Michel Bouvard, Philippe Lefebvre, and Vincent Dubois. Additionally, Aurélie Decourt (Marie-Claire’s daughter) lectured on the French Conservatory System, and she and I gave a lecture-recital on the Trois Danses. And Norma Stevlingson, who is now translating Jehan Alain’s biography (currently available in the original French by Aurélie Decourt: Jehan Alain: biographie, correspondance, dessins, essais) was there as well.

I also just released a new recording, entitled Jehan Alain Organ Works: A 1942 Perspective, a two CD set based on Albert’s markings in the 1942 edition. It’s recorded on the Alain family organ (now at the Grange de la Dîme in Romainmôtier, Switzerland) and the Hellmuth Wolff organ at the University of Kansas. It has a booklet with notes by myself and Norma Stevlingson, and is now available.

What do you think is the future of Alain scholarship?

Looking into the future, I don’t think there will be any lack of people who will play and champion Jehan’s music or carry on Marie-Claire’s legacy. The Association Jehan Alain is a major society for the promotion and preservation of his music and the Alain family organ. From that earliest moment when I said “I just want to meet her,” I never realized she would become a wonderful mentor and lifelong friend.

is the Dane and Polly Bales Professor of Organ and Director of the Division of Organ and Church Music at the University of Kansas. He earned a Bachelor of Music degree from St. Olaf College, Master of Music degree from Northwestern University, and Doctor of Musical Arts degree from the Eastman School of Music. He has studied with Edmund Ladouceur, Robert Kendall, Karel Paukert, David Craighead, and Catharine Crozier, and in France with Marie-Claire Alain.