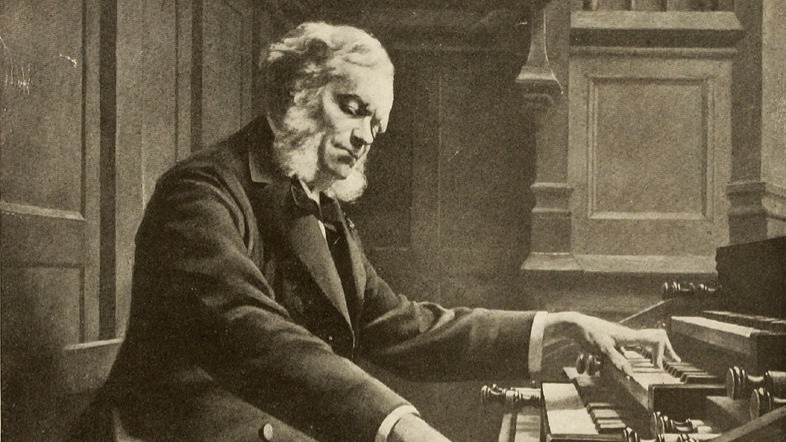 Who among musicians could ever ignore the fire of Ludwig van Beethoven's symphonies? What composition written after 1750 lacks the influence of Johann Sebastian Bach? Conservatories and music schools have praised German and Austrian composers for their mastery of composition for hundreds of years, and the nineteenth century French composer and organist César Franck certainly came into contact with this repertoire. This is seen clearly in his "Choral I in E Major" from Trois Chorals, and though the musical form is quite different from that of J.S. Bach, the chorale was perfected by both geniuses.

Additional influence in Franck's works came from Beethoven. At a young age, Franck studied composition with the renowned pedagogue Antoine Reicha, who, in his youth, played in the Elector of Bonn's orchestra. There, he befriended a saturnine and boorish young man ten months his junior named Ludwig van Beethoven (Stove 24). In 1801, Reicha and Beethoven reunited and both were heavily involved in the forward-thinking orchestral style of playing developed by the Mannheim School. The teenage César Franck learned counterpoint and composition from Reicha in the same manner as Beethoven. The importance and influence of Reicha and Beethoven was evident to Vincent d'Indy, one of Franck's pupils and biographers, who opens his 1906 study of Franck profoundly: "at the precise time when the giant of the symphony, Ludwig van Beethoven, had just put the finishing touches to the manuscript of that among his works which he rightly held himself to be the most perfect, the sublime 'Missa Solemnis in D Major,' on that date, December 10, 1822, was born in Liège the one who was destined to become in religious art as much as in the symphonic field, the true successor to the Master of Bonn." Decades later, this musical education became the foundation for his Trois Chorals.

Franck composed his Trois Chorals over the course of two months in the summer of 1890; he died in November of the same year, and the works were published posthumously in 1891. Franck never had the opportunity to teach these three masterpieces, though he played through them on the piano in his home. However, it is clear that these works were intended to be played on a French symphonic organ — Franck reportedly wished to register them on the Cavaillé-Coll organ at Sainte-Clotilde in Paris (where he was organist), but never did. The dedication gives further evidence of the work being steeped in the French Romantic School, though it is somewhat controversial — the Durand edition says that the first chorale is dedicated to Eugène Gigout, but Vincent d'Indy argues that Franck intended that it be attributed to Alexandre Guilmant (Smith 209–210). Regardless of the dedicatee, the symphonic style of the work resembles Guilmant’s organ sonatas, which were written for Cavaillé-Coll organs. The "Choral I in E Major" was completed on August 7, 1890, during which time Franck and his family vacationed at Nemours. In a letter to a friend written later that month, he was likely referring to the E-Major Chorale: "I have written a long organ piece that I have entitled simply Choral. A chorale it is, indeed, but with plenty of fantasy," (Smith 212).

Though Franck's new work indeed exhibits plenty of "fantasy" as we will see, its inspiration dated from the time of Martin Luther, and was perfected by Scheidt, Pachelbel, Buxtehude, and J.S. Bach. Vincent d'Indy describes the form as "the exposition of series of short musical phrases, separated by intervals of silence, the sequence of which forms a complete melodic phrase," (d'Indy 198). After Bach's immediate successors, the importance placed on chorales greatly diminished for about 140 years. In the years leading up to Franck's birth, Beethoven had brought back the style using the combination of two forms: the "chorale variation" and the "Beethovenian fantasia", seen particularly in his late string quartets (Smith 86). This overarching style mixture resulted in advanced musical developments. Franck was in the perfect position in music history to bring his musical glory to the chorale.

The beginning of the E Major Chorale is odd because the initial theme is an accessory part of the whole:

The opening statement is also in the form of a chorale, so it may be interpreted as a conclusion, a "coda." Franck himself told d'Indy, "You will find that the Choral is not what you expect. The real chorale grows out of the work," (translated in Smith 229). The exposition is a "Lied" that establishes E Major. Immediately following this introduction is the first variation, in which phrases II, IV, and VI are spared, and the seventh phrase carries more purpose than being a mere coda.

The second variation demonstrates Beethoven's influence. d'Indy calls it a "harmonic emanation," not a commentary on the theme — here, phrases I and IV are developed, though the seventh phrase is most emphasized. The musical phrases are repeated and varied with growing dynamics, and this section is marked slightly faster than the introduction and first variation. The result is the natural buildup of musical tension, reminiscent of the development of the final movement of Beethoven's Ninth Symphony, in which the double basses play the theme of joy slowly with deep expression at first, and by the end of the symphony, the whole orchestra plays the theme prestissimo.

The third variation focuses on phrase VII and, as Roland Smith describes, "drags it with difficulty from the darkness in which the other phrases have held it back, so that gradually it rises towards that final outburst in which, stated by the full power of the organ, it triumphs over all its companions in a joyful peroration in the key which has been reconquered at last." In its magnificence, the thematic and contrapuntal mixtures become the reprise ("organo pleno") of the choral theme featuring the opening phrase in a triumphant sense (Smith 88). This was the victorious outcome Franck tried to explain to d'Indy when he said the true chorale "grows out of the work." Franck's students, having only heard him play the chorales on the piano, later understood his comments when they listened to these works on the organ after his death. One is likewise reminded of the triumphant finales of Beethoven's sonatas when listening to this piece.

Bach’s influence in the Chorale in E Major is apparent as well. Before Franck’s death, he shared the following with his pupil Pierre de Bréville: “Before I die, I am going to write some organ chorales, just as Bach did but on quite a different plan.” (translated in Stinson 85). In this dialogue, Franck is referring to ornamental accompaniment of themes. A prime example is featured in the following example (mm. 65–68):

The texture in this section is mostly four voices, like a Bach chorale. The registration calls for a solo reed in the melody and flute accompaniment. One notes the “sigh figure” in measure 67 (the third measure of the excerpt above) concerning the parallel tenths between the soprano and tenor, which is similar to Bach’s treatment in O Mensch, bewein dein Sünde groß, BWV 622.

In general, Franck established himself as a great musical architect. He was an innovator in the "cyclic style," which d'Indy declares as, "a discovery as important to symphonic music as the Wagnerian procedures were to opera," (d'Indy 91). He is also remembered as a brilliant artist of melody. Many of his melodic outlines resemble those of J.S. Bach, such as the seven different phrases in the first chorale.

Looking back at the "Chorale I in E Major," one draws many other conclusions beyond Franck's German influence. Some scholars suggest that Franck did not imagine that his organ works would survive for long. Though he was an organ pedagogue, he desired to teach composition at the Paris Conservatory, and he spent much of his time writing works for other instruments. There are compositional errors in early versions of the first chorale, particularly in regard to repeated notes. In several measures, where one might normally tie two notes together in typical organ writing, the composer has separated the two so that a lift is required. Franck may have done this because Trois Chorals were initially played on the piano throughout the process of composition. Rollin Smith suggests that the repeated notes should be tied over despite that these ties are missing in the Durand edition.

Franck's Trois Chorals build upon the contributions of Bach and Beethoven, and while honoring the chorale style, Franck's writing ushers in gripping emotion and a spirit of dedication. Felix Aprahamian sums it up best: "...in the Trois Chorals is found the purest and most complete expression of Franck's genius as a composer: they take their place beside the organ works of Bach among the masterpieces written for the instrument. Deriving more from the later Beethoven quartets than from the chorale preludes of Bach, they are, in a sense, variations on a chorale-like theme, but welded into wholes unimagined by the earlier composers of partite," (Smith 207).

is a second year master’s student in the Sacred Music at Notre Dame program pursuing a Master of Sacred Music degree in Organ Performance. His teacher is Dr. Craig Cramer. J.J. holds an organist position at Basilica of the Sacred Heart in Notre Dame, Indiana. He is an alumnus of Westminster Choir College, where he graduated Summa Cum Laude in 2017 with a Bachelor of Music in Sacred Music. J.J. made his international debut in March 2018 on a tour with Notre Dame's Women's Liturgical Choir that included venues such as St. Joseph’s Oratory in Montreal and St. Michael’s Cathedral Basilica in Toronto. Playing organ and conducting the choir, he was recorded for national broadcast on Canada’s Salt & Life television network. Later that year, J.J. was awarded a grant from the Nanovic Institute for European Studies. With this funding, he performed and studied organ music in France and England in July 2018. A leader in his department, J.J. serves as SMND's representative to the university's Graduate Student Union. He also was selected to be an ambassador of SMND to the Republic of Georgia in June 2018, provided by the Alice Martin Fellowship. Most recently, J.J. was named a finalist for the 2019–20 Frank Huntington Beebe Fund for Musicians Fellowship. He has held positions at several Catholic Churches, including the Cathedral of St. Thomas More in Arlington, Virginia. J.J. also has extensive experience and training working with both singing and handbell choirs. He is an active member of the American Guild of Organists and the National Association of Pastoral Musicians, where he serves as the youngest member of the National Publications Committee.