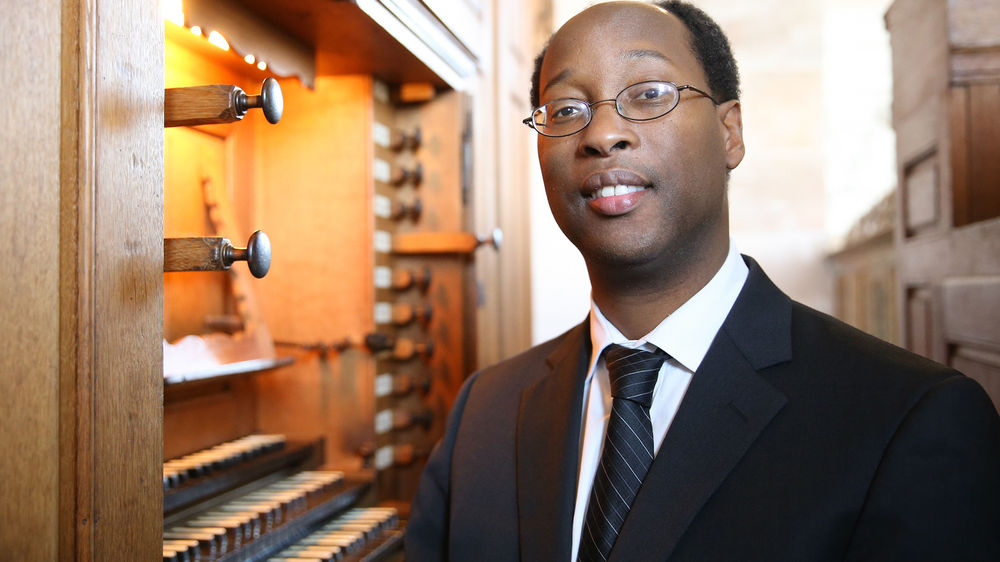 A native of Toronto, Canada, Kola Owolabi was recently appointed Professor of Organ at the University of Notre Dame in South Bend, Indiana, USA, having previously held faculty appointments at the University of Michigan and Syracuse University. Owolabi maintains an active career as a solo recitalist in North America and Europe, and holds degrees in organ performance and choral conducting from McGill University, Yale University, and the Eastman School of Music. In this interview with Vox Humana Associate Editor Nicholas Capozzoli, Dr. Owolabi speaks of his diverse musical interests and plans for his new position at Notre Dame.

Kola, thank you for agreeing to this interview. Our readers are eager to read about your career and interests. First, how did you become interested in the organ?

I began my musical training with piano lessons from age seven when my family was living in Nigeria. Music plays a vital role in African culture, and students had to sing at daily morning school assemblies. In this setting, I learned to read music but also developed the ability to play by ear. Upon returning to Toronto, Canada at age 10, my parents enrolled my brother and me at St. Michael’s Choir School, which was connected to the Roman Catholic cathedral. This school for boys had a regular academic curriculum from Grades 3 to 13. In addition, each student participated in daily choral rehearsals with one of the school’s choirs, which provided music for four masses each weekend at the cathedral. I was mesmerized by the playing of the cathedral organist, Brian Rae, and would come home from church every week, sit down at the piano and try to imitate things I had heard him do during mass, particularly with hymn playing. When I was 12, I began taking organ lessons with Mr. Rae, and my love of the organ grew from there. Shortly after, with some staff departures at the choir school, they began to rely on students to play for the Sunday masses at the cathedral. I became Associate Organist in 1992 at age 15, which meant that for my last four years of high school, I played for three masses every Sunday, accompanying the cathedral’s choirs and playing hymns, preludes and postludes.

You’ve studied in both Canada and the United States. What similarities or differences did you notice during your organ studies?

I deliberately chose three schools that would give me the opportunity to study with teachers who had different areas of expertise and pedagogical approaches. I think the differences between the programs had more to do with the faculty and the resources of each program, than whether the school was in Canada or the United States.

At McGill University, I had the majority of my lessons on mechanical action instruments, most notably the French classical organ by Helmuth Wolff, which was versatile enough that we played Bach, Frescobaldi, Mendelssohn and some twentieth century repertoire on it. We also had lessons on various early twentieth century Casavant organs around town. Still, the repertoire was more geared towards the baroque than at any other school I attended. For each of our three undergraduate recitals, the repertoire requirements were the same:

1. Three Bach works: a prelude and fugue, two movements of a trio sonata, and one large choral prelude

2. Two works written before Bach, each in different national styles

3. One romantic and one twentieth century/contemporary piece.

One of the most beneficial aspects of my training at McGill was the chance to take continuo lessons and play harpsichord continuo in small chamber ensembles with other students performing on baroque string and wind instruments. In my second year, I played continuo with the McGill Baroque Orchestra and Opera McGill in a staged performance of Handel’s Giulio Cesare. That remains one of the most formative performing experiences of my student days.

I chose to go to Yale University in part to study on the Skinner organ in Woolsey Hall, and was grateful to work with Martin Jean and Thomas Murray on this magnificent romantic, orchestral-style organ. It was there that I first played some of William Bolcom’s Gospel Preludes, the Elgar Sonata and several pieces by Petr Eben. I really appreciated the attention given to console technique during lessons, and Professor Jean also helped me to develop a stronger sense of rhythm in my playing.

I studied at Eastman School of Music from 2003–2007, when they were just beginning to acquire their remarkable collection of historic instruments, which now includes several organs, a two-manual pedal clavichord, pedal piano and French harmonium. The Eastman curriculum included a larger number of courses focused on organ repertoire, history, culture and instrument building traditions than the other programs.

What sparked your interest in historical improvisation? What advice do you have for organists wanting to improvise in historical styles?

As an undergraduate student, I worked at the Presbyterian Church of St. Andrew & St. Paul in Montréal. Interestingly, the church had a long history of programming English Victorian choral repertoire and playing hymns in that tradition. I remember going to Germany for the first time in 2001 and hearing organists introduce hymns by improvising choral preludes in the baroque style. This opened up a new world for me, and shortly after that I had a chance to study baroque-style improvisation with William Porter during my studies at Yale; I ultimately did my doctoral lecture recital on improvising chorale partitas in baroque styles. I think those pieces are excellent models for organists who want to learn how to improvise in early styles. The works of Johann Pachelbel in particular feature a specific technique in each variation, so students can learn a step by step approach to working with different contrapuntal techniques. Then by studying other composers, you can broaden the range of musical styles that you can work with. You must work slowly and carefully, in a process that might seem like a cross between composition and spontaneous improvisation.

Tell us about your involvement with Nigerian organ music. Can you point us to other African composers and resources? What about Black composers in North America?

This is actually a fairly new area of exploration for me. In 2014 I performed several movements from Godwin Sadoh’s Nigerian Organ Symphony at the American Guild of Organists National Convention in Boston. This piece, as well as his Five African Dances are published by Evensong Music and are available here. Several of his other compositions are published by Wayne Leupold Editions. Fela Sowande wrote some interesting pieces that were published by Chappell Music in England in the 1950s; these were shaped by his period of study at the University of London and Trinity College of Music, and his arrangements of African American spirituals blend various musical influences such as Franz Liszt, Charles H.H. Parry, and Herbert Howells. Several of them are reprinted in a very useful three volume collection of music, King of Kings: Organ Music of Black Composers, Past and Present, released by GIA Publications in 2008–2009, available here. The collection also includes music by Florence Price, John Wesley Work III, Uzee Brown Junior, and William Farley Smith. Morning Star Music Publications has published an eight volume series called the African-American Organ Anthology, available here. In addition, ECS has partnered with the AGO to produce the ECS/AGO African American Organ Series, available here. Florence Price's music is available in four volumes published by ClarNan Editions, edited by Calvert Johnson, and I believe more volumes are forthcoming; they are available here: volume 1, volume 2, volume 3, volume 4.

You have held numerous academic positions and have recently begun a new post as Professor of Organ at Notre Dame University. Congratulations! What trends have you noticed in organ enrollment in North American institutions? How can these programs better equip students for successful careers?

The landscape has obviously shifted from 40–60 years ago when there were several large programs across the country with 30–50 organ students. On the other hand, I think that organ pedagogy has continued to evolve and diversify in ways that are relevant to the careers today’s organ students will have. In North America, many schools allow for undergraduate students to pursue double degrees in a variety of disciplines in the sciences and humanities. These students are well set up to combine full-time careers in a non-musical field with part-time employment as a church musician. For students who pursue graduate work in organ, several programs have considerable course offerings in sacred music skills and improvisation, choral conducting, harpsichord and baroque performance practice. DMA [doctor of musical arts] programs typically include a substantial amount of coursework in music theory and musicology, since many colleges are looking to hire an organ professor who can also teach core undergraduate classes in these areas. Many students supplement their education by attending summer festivals and organ academies in Europe, or obtain grants to spend longer periods abroad studying at eminent European conservatories.

Notre Dame Univesrity is one of the leading centers of Roman Catholic church music study in North America. There are many significant organ installations in Roman Catholic churches and cathedrals, and an ever-growing pool of professional organists. Given Notre Dame’s strong foundation, how do you intend to shape this program for the future?

The sacred music program at the University of Notre Dame offers a Master of Sacred Music degree with concentrations in organ, choral conducting, and vocal performance, and our DMA program has concentrations in organ and choral conducting. The students of all three tracks work closely together and typically take secondary lessons in all three areas. Students also take courses in musicology, medieval studies, liturgical studies, and theology. I see this interdisciplinary work as invaluable training for the range of skills that our graduates will need in their professional careers, whether they work in church settings or academia. We are blessed to have several superb instruments on campus, including two large organs by Paul Fritts and a seventeenth century Neapolitan organ. I encourage all my students to study a wide range of repertoire during their time at Notre Dame, and to develop their technique and listening skills through their encounter with these instruments. Our students serve as interns at the Basilica of the Sacred Heart on campus and at local churches. I am developing classes in creative hymn playing and improvisation that will support and shape the work our students are doing in these internships. I’m optimistic that there will always be a place for good quality music in the liturgy, although tastes and trends will continue to evolve, as they have for many centuries.

is Professor of Organ at the University of Notre Dame. There he teaches the graduate organ performance majors in the sacred music program, as well as courses in hymn playing and improvisation. He previously held faculty appointments at the University of Michigan from 2014 to 2020, and at Syracuse University from 2006 to 2014. Dr. Owolabi has had an active career as a solo recitalist, including performances at St. Thomas Church Fifth Avenue in New York, St. James Episcopal Church in Los Angeles, The Memorial Art Gallery in Rochester, New York, St. Paul’s Anglican Church in Toronto, Cornell University, Pacific Lutheran University, and The University of Notre Dame. International venues include Klosterneuburg Abbey, Austria, Église du Bouclier in Strasbourg, France, and the University of the West Indies in Mona, Jamaica. He holds degrees in organ performance and choral conducting from McGill University, Montréal, Yale University and the Eastman School of Music.