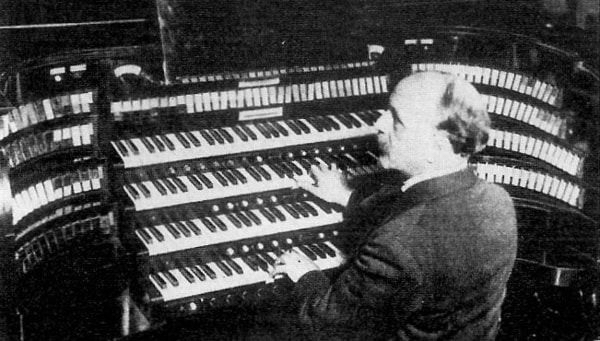 Eric Plutz, University Organist at Princeton, will play the complete Vierne symphonies on the Skinner organ at Princeton University Chapel in a marathon that will be broadcast on YouTube and Facebook on October 8, 2020, the 150th anniversary of the composer's birth. In this interview with Vox Humana Editor Christopher Holman, Eric discusses this innovative project.

Eric, thank you very much agreeing to this interview. Before we talk about The Vierne Project, could you briefly tell us about your musical training? Did you study piano from an early age? When did you take up the organ, and what attracted you to it?

I began my piano study when I was eight years old; both my parents were amateur musicians and knew the value of teaching their children music in some form. My mother taught me how to read music, she noticed I seemed to take quickly to it, and I even worked on some music before I had my first “real” lesson! Then when I was 12, during a summer vacation, we visited my mother’s side of the family in Indiana. One evening we went to the Paramount Music Palace in Indianapolis — an old movie theatre, with the theatre organ still there, but renovated and turned into a pizza place. There were lights and contraptions, and the console rose and turned on a hydraulic lift — it was all very attractive to a 12-year-old boy. I was transfixed. When I returned to my home town, I asked the organist of our church to teach me lessons, and she started me on classical rep (not theatre organ rep), to which I would’ve been drawn anyway. I began my university years as a double major (piano and organ), and while I still love the piano, I dropped that major, completing both undergrad and graduate degrees in Organ Performance.

What is the Vierne Project Marathon, and how did you come up with the idea?

In 2009 while driving home after work one day, I was contemplating my unique position — that I was a full-time organist at a University who had the time and resources to take on a large venture. I have always enjoyed Vierne's music and realized that his Sesquicentennial would be in 2020. I had just learned my first complete Vierne Symphony (No. 2), and thought that a lofty, difficult, yet attainable goal would be to perform all the symphonies at the Princeton University Chapel on Vierne's 150th birthday. I formulated a plan to learn and perform a new symphony every other year (basically), including a rota of bringing back and performing the symphonies I had already learned.

As I learned more of them, I realized audiences in other parts of the country might be interested in hearing these varied works. I therefore named this effort to perform all six symphonies around the country "The Vierne Project," and alerted anyone I could think of to it.

Has Vierne's music always been special for you?

The first recording of the complete symphonies I owned were the LPs by Ben van Oosten on the Cavaillé-Coll organs in Lyon, Toulouse, and Rouen. When they were later released as CDs I bought them again. Not only do they have a special place in my heart because they were the first (and those organs!), but I now know and respect van Oosten's playing as scholarly, insightful, and refined. Upon my arrival at Princeton University, he had already made arrangements to record one of his Dupré discs at the Chapel, so I was able to then meet him.

Around 2017 I requested a spot on the series at Notre Dame Cathedral, Paris. These are 50-minute programs on each Saturday night, and recitalists must submit two programs, from which the Cathedral chooses one. I wrote, and in the most cordial words I could muster, asked if I could play a complete Vierne Symphony (secretly, I wanted to play No. 5) as I was learning them all to honor his Sesquicentennial. The response came back, "You may play a complete symphony, except No. 5 — it's too long." Drat. I planned to play Symphony No. 2.

When I had been given my date at Notre Dame, I wrote to Ben, asking if I could play the symphonies for him in The Hague, where he is based. He said yes, so I arranged to fly to The Netherlands first, play for him, then take the train to Paris. But shortly after purchasing my tickets, Notre Dame caught fire. I reached out to several Parisian contacts, including Sophie-Veronique Couchefer-Choplin at St. Sulpice, and she graciously asked Daniel Roth, on my behalf, if I could have his scheduled spot following the main mass on November 24. I had a wonderful trip: two sessions with Ben van Oosten (one was 5 hours straight!), a day trip to Rouen (Jean-Baptiste Monot could not have been more welcoming), and playing Symphony No. 3 at St. Sulpice.

How did working with these instruments influence your conception of the symphonies, and from a player's perspective, what are the differences between performing these on a Cavaillé-Coll organ versus the Skinner at Princeton University Chapel?

My first thought is that the sound has influenced my conception. Not even the best recordings can truly convey the sound of a Cavaillé-Coll instrument. When I first heard the organ at St. Sulpice (during my first trip in 2004), and how it “roared” during the Prelude to Duruflé’s Suite, it was a revelation. It is an amplification of the 8' tone, from the "chest" of the instrument, yet not overwhelming or offensive in the least. I also noticed that when full swell was closed, the reed sound itself diminished more than the foundation sound. These details (and many more) I try to reproduce on the fairly American instrument at the Princeton University Chapel. It is a challenge, because the Chapel organ is not French at all — it actually excels at playing English music. My registrations can look odd, but I am following my ear, and trying to convey to the audience what Vierne would’ve heard from the Notre Dame organ and other instruments that surrounded him.

Was your idea from the outset to make this an online event, or did it become so in light of the COVID-19 pandemic?

I began my scheduled performances of The Vierne Project — the complete symphonies in two performances each at All Saints Episcopal Church in Beverly Hills, California, and the Duke University Chapel in Durham, North Carolina. Another performance of just three symphonies in Minneapolis followed. Then, of course, the coronavirus appeared. Three of the scheduled performances were cancelled outright, but all others either have been rescheduled, or will be. Two online performances (from St. Ignatius Loyola in Manhattan, and St. Ann Roman Catholic Church in Washington, DC) have been added, remarkably.

The goal that I mentioned at the beginning, the climax of this entire project was to have been my performances at the Princeton University Chapel on October 8 and 9. With nothing but uncertainty looming in the future, I've decided to make sure that Vierne is honored on his special day, even if not with an in-person performance at the Chapel. I will be recording each symphony with high-quality video and audio at the Princeton Chapel Organ, and will be premiering the symphonies online, each one on the hour, in an online marathon, The Vierne Project Marathon.

Running alongside these live performances, I'm also recording the symphonies for a CD Box Set release. The six symphonies, recorded on six different instruments, will be available on the Affetto label.

The Vierne Project Marathon will begin on October 8, 2020 at 4:00 PM EST, and will be available on the Princeton University Office of Religious Life YouTube channel. Also check Vox Humana's social media pages for direct links on the day of the premiere.

is University Organist at Princeton University, where his responsibilities include playing for weekly services at the Chapel, Academic Ceremonies, and solo concerts, as well as accompanying the University Chapel Choir in services and concerts. He coordinates the weekly After Noon Concert Series at the University Chapel, is Lecturer in Music and Instructor of Organ at Princeton University, and maintains a private studio. Also in Princeton, Mr. Plutz is rehearsal accompanist for Princeton Pro Musica. In 2016, Mr. Plutz received the Alumni Merit Award from Westminster Choir College of Rider University.