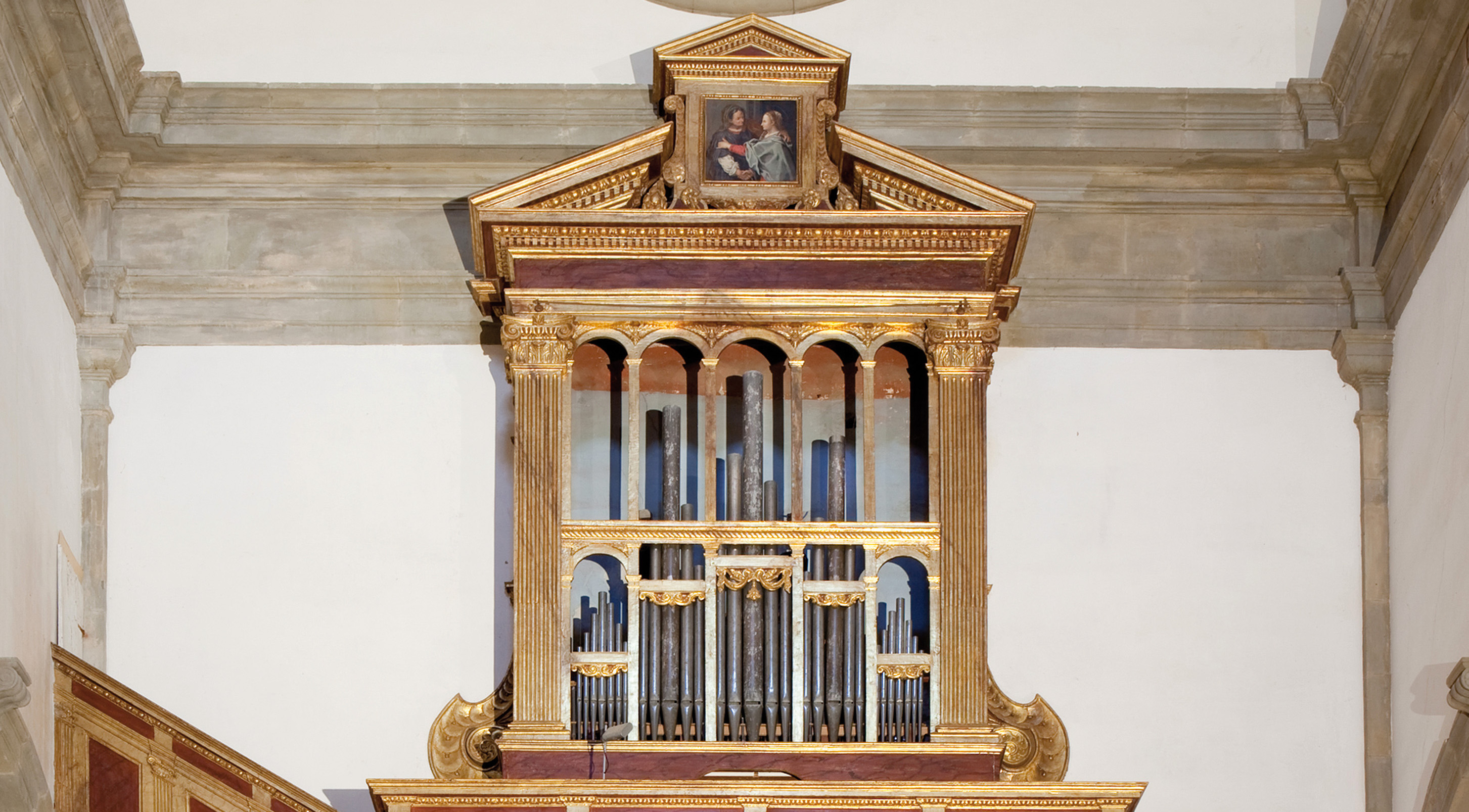 Gian Carlo, many thanks for agreeing to this interview. You are the Director of Organi Storici Cortona, an organization that has restored many important organs from the fifteenth through nineteenth centuries in the Cortona District of Tuscany. How did the Association begin, and how did these restorations come about?

I am not a musician, but I am dedicated to the preservation of the treasures that our ancestors have passed down to us. I was born in Cortona, completed my university studies in Tuscany, and have worked at the top echelons of an international petroleum company. I founded the Association in the year 2000 to establish an organization focused on restoring some of Cortona’s historic organs. My visits to Cortona had allowed me to verify the state of abandonment of the town’s organs. I remembered their captivating sound when I was little more than a child during the years of the last World War, that the entire community came together in the church and, listening to the organ, prayed for salvation and the end of that inhuman tragedy. As to what led to the restorations, the first step involved finding all of the useful historical information, since the builders of many organs were unknown or attributed erroneously. Thanks to this meticulous work, today we know the history of the Cortona instruments, the details of which we have summarized in various publications (available here). We developed contacts with the best restorers over the years, and the first restoration — that of the organ in the church of the Oratorians, San Filippo Neri (information here) — began in 2003.

When the Association began, had any organs been restored?

At that time, only one small, portable organ located in the cloistered convent of the Santa Chiara had been restored. Built in 1832 by Giacobbe and Serafino Paoli, it had been restored in 1972 (photo in the gallery at the end of the article). And it was precisely in the convent’s choir that we held the first concert on a mechanically operated pipe organ. Those present were enthused.

Cortona's vast territory extends from mountainous locations bordering Umbria to the plains adjoining Sienna — a territory strewn with churches and abbeys, some dating to the year 1000, that testify to Cortona's importance in Tuscany from the era of the Communes, Lordships, and the Grand Duchies of the Medici and the Lorenas. Before restorations began, we took a new census of the Cortona organs, realizing, unfortunately, that some had gone missing and others had irreversibly been tampered with. As to those in the surrounding towns, the only one that merited restoration proved to be the 1780 Giovanni Zanetti organ at Ossaia. As to the priority of restorations, we have favored the oldest organs, some of which, now functional, are the only surviving instruments in Italy of once-famous organ builders.

Who built the Tuscan organs, and how were they financed?

As to the builders, I will cite only the most famous of their time: Onofrio Zefferini of Cortona, called the Michelangelo of organs, who built the monumental instrument at Florence Cathedral; Azzolino della Ciaia from Sienna, who built the organ of Chiesa di Santo Stefano dei Cavalieri at Pisa; and finally Luca di Bernardino of Cortona who, in the middle of the sixteenth century built the organs at the Cathedral of Arezzo and the Chiesa di San Domenico in Cortona (information here).

​The first two organ builders belonged to important noble families of their cities, and the third was from a more humble lineage. Many talented local artisans who helped build the organs worked in Tuscany. In regard to financing, the secular clergy provided it; in the late Middle Ages and the Renaissance, the Franciscan, Servite, Dominican, and Augustine orders erected instruments with the people's support as well. For centuries, Cortona remained faithful in commissioning organs.

Before the era of concert usage, who played the organs, and is there any repertoire unique to Cortona?

Cortona was a bishopric for a good 700 years. In previous centuries, it was the priests who played, since music education was part of their study. In important churches, the priests were also joined by instrumentalists, independent of their secular or religious position. And in cathedral churches, the Maestri di capella were responsible for teaching the choir and playing the organ. To respond to the second part of your question, I will say that the only Cortonese work passed down to us are motets for voice(s) and basso continuo written in 1614 by Michelangelo Amadei, a modern edition of which we organized (available here). I maintain that a lot of musical literature has been lost over time.

Which builders have been involved with restorations, and how have the churches and people of Cortona responded to hearing these musical treasures?

The best of the era: Lorenzini, Fratti, Zanin, dell-Orto, and Lanzini. I recall that when I met the great Gustav Leonhardt in Milan to ask him to play Luca di Bernardino's organ, his first question was, “Who rebuilt it?” "Marco Fratti," I replied. “Well then, I will come when you wish and the amount of compensation has no importance,” he told me without hesitation. As for the second part of your question, I can say that the response has been positive. However, we have to keep in mind the scarcity of the population, which, during the winter period, is not more than a thousand inhabitants within the city walls. Between the Renaissance, Romantic, and late Romantic periods, nearly 400 years has passed, and between Gabrieli and Verdi there lies more than an abyss of time — many generations, from the nineteenth to the twentieth centuries, grew up on opera. If you recall that baroque music was largely rediscovered and reevaluated in recent times, what can we say about the rediscovery of even earlier music and organs?

Are there other historic organs in Cortona that have not yet been restored?

Yes, one. It is located in the church annexed to the ancient cloistered monastery of the Countesses. Constructed by a noted organ builder from Rome, Attilio Priori, in 1895, it is the only organ in Cortona with two keyboards, and with 54 keys: a precious instrument that was commissioned by the Redemptorist Fathers, an order of cultured priests who favored the teaching of music and astronomy. At this time the church is closed and the monastery has been transformed into a luxury hotel. The proprietor has not shown any interest in this restoration, which for now has been delayed until better times.

What projects are coming up next for the Association?

Parallel to the restorations of organs, we have dedicated our resources — professional and economic — to the restoration of cultural properties, such as the eighteenth-century statue of our co-patron, Santa Margherita da Cortona. Today this monument, located in the center of the city, neglected in the past because of its condition, is now one of the artworks in the city which is most photographed by tourists. Currently, we are restoring the Chapel dedicated to the 650 citizens of Cortona who died in the 1915–1918 War, the interior of which houses valuable frescoes. And if our resources allow it, we will continue our concert activity, for solo organ and organ with other instruments.

My biggest desire and hope is that organists, music students, and American and Anglo-Saxon university professors will meet in Cortona, having come to know and play its instruments. Four years ago, of their own initiative, students and professors of Yale University's Institute of Sacred Music came. I quote only one part of the letter that Martin Jean, Director and Professor of Organ, wrote to me: “Dear Mr. Ristori, ... As if the exquisite vistas and charming landscapes were not enough, we found our visit to your magnificent instruments a life-changing experience. There you have in the city of Cortona a kind of microcosm of organ history unlike virtually any other place in Italy. Anyone with an interest in the instrument owes you a debt of gratitude for the careful ways in which you have preserved these historic treasures. As you know, organs in Italy vary greatly by region and by century, and here you have carefully restored these precious Tuscan jewels, each a perfect example of its type. We found equally inspiring the generous ways you shared these instruments with us, and we thank you for your hospitality on the organs, at dinner afterwards, and, indeed, throughout our visit."

Few cities can, like Cortona, boast so many important and beautiful churches and historic organs — among the finest examples produced by the Tuscan organ school between the sixteenth and nineteenth centuries — in such a small district. Beginning January 2001, a group of the townspeople of Cortona formed the Association, whose aim was to restore Cortona's historical organs.

These instruments, which represent a common heritage — partly forgotten until now and only rarely used — require a considerable amount of restoration in order to recover their original splendor and to be returned to the international community for their appreciation. The Association aims not only to make an active contribution to the protection and restoration of Cortona's ancient organs, but also to organize concerts of music for early instruments. Another goal is to promote study and research about Cortona's school of organbuilding.