The American Colonial Organ at Tacoma 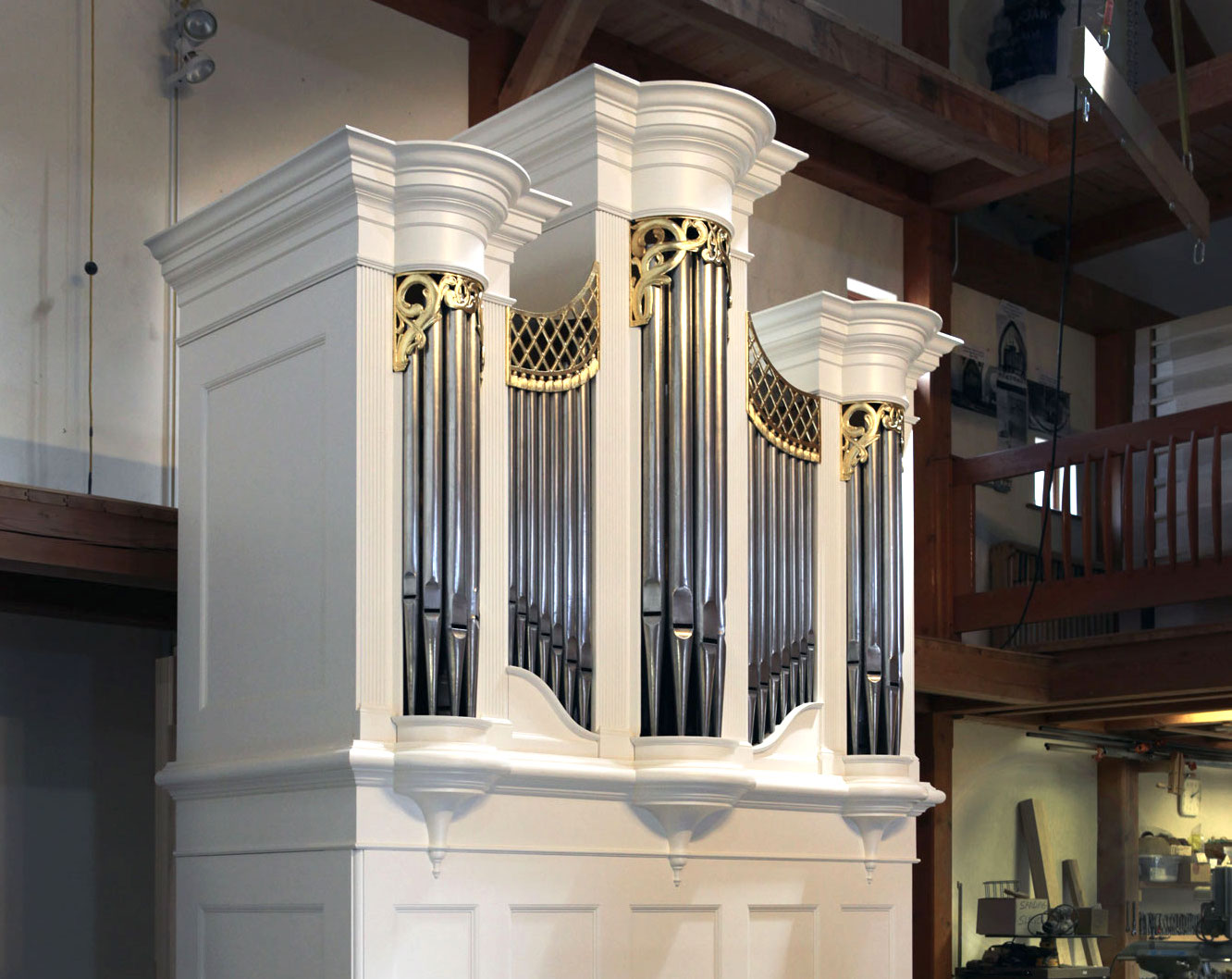 The American Colonial Organ at Tacoma

The Lone Survivor
Sometime around 1908, shipping crates containing a nearly 90-year old organ arrived at St. John’s Lutheran Church in Tacoma, Washington. Even at that time, the organ was likely the oldest in the state, and is one of the few remnants of the earliest surviving tradition of organ building in the Post-Colonial United States. It had been built originally in 1819 by Philip Bachman in Lititz, Pennsylvania for Friedens Lutheran Church in Myerstown, Pennsylvania. The organ was one of about ten organs built by Bachman, the son-in-law of David Tannenberg, America’s first native-trained organ builder. Now, more than 100 years later as the organ approaches its 200th "birth" day, it has undergone major alterations and more recently, complete restoration with reconstruction to a condition aurally and visually faithful to its origins.

A New Apprentice
David Tannenberg, the famed early American organ maker, built about 40 organs during his career. Only nine of his organs have survived to the present time, a few of them in quite original condition, while others have been substantially altered. Tannenberg's work dominated the organ building business in the English Colonies (and later the young United States) in the latter half of the eighteenth century. The beautifully proportioned cases with exquisite woodworking details and high-quality pipe making and voicing gave his instruments a well-deserved reputation for first-class construction. A devout Moravian, his strong work ethic was evident in his careful craftsmanship and attention to detail.

Toward the end of his career, at age 64 in 1792, Tannenberg’s first wife died, and he requested permission from the Moravian Elders to ask for a new apprentice from the church headquarters in Herrnhut, Germany. They approved, and the 31 year old Philip Bachman arrived in 1793. Only two months later, he married Tannenberg’s youngest daughter and worked with Tannenberg until 1800. At that point numerous personal conflicts came to a head between Tannenberg and Bachman, and their friendship seems to have ended. In spite of the rift between them, Bachman continued to work for Tannenberg, installing both extant organs in Salem, North Carolina in 1798 and 1800 and at Hebron Lutheran Church in Madison, Virginia in 1802. Tannenberg even made the metal pipes for one of Bachman’s organs that was completed in 1803. After Tannenberg’s death in 1804, he left Bachman "all my tools together with all my papers and writings relative to the making of organs." It appears that Bachman built ten organs, as well as a number of other stringed keyboard instruments between 1802 and 1821. The reconstructed Tacoma organ contains the sole remnants of Bachman’s organbuilding, but at least one Bachman fortepiano survives as well. Significantly, it seems likely that Bachman used Tannenberg’s 1802 Madison, Virginia organ design for his 1819 organ that eventually found its way to Tacoma.

From Pennsylvania to Tacoma
The organ that is now in Tacoma was originally built for Friedens Lutheran Church in Myerstown, Pennsylvania, and was dedicated on Easter Sunday in 1819. In 1901, the church purchased a new organ, leaving the Bachmann organ in place where it continued to be used occasionally. When the church’s interior was remodeled in 1908, the old organ was removed. At that time, a former member who had moved to Tacoma, Washington found out that the old organ was available, and his new church in Washington, St. John’s English Lutheran Church, asked if they could somehow obtain the instrument. The Pennsylvania church agreed to donate the organ to the Tacoma church provided the latter would pay for the associated shipping costs (there are unsubstantiated reports that the organ traveled by ship all the way around the southern tip of South America to Tacoma — the Panama Canal was not completed until 1914). The organ arrived in Tacoma, and "it was found to be a single manual hand-pumped organ." A local organ technician reassembled the organ at St. John’s and "added a pedal bass." The organ was used in the church (apparently still as a solely hand-pumped instrument) from its dedication in November 1910, until Easter Sunday 1933.

In keeping with the times, a larger, modern organ was sought by St. John's. "In March, 1932, a contract was entered into for rebuilding and electrifying the Bachman organ — total price $1800. It was at that time converted into a two-manual organ." Most of the original organ was discarded, with only the original upper case front and façade pipes remaining as a front for the pipe chamber of the electric-action organ. Fortunately several other important components of the old organ were preserved, including the upper section of the detached console, with its original ivory keyboard and Bachman's nameplate. This portion of the organ was displayed for a time at the State Museum of Washington in Tacoma before being returned to the church. The original stop rods were also preserved, although the stop knobs and labels were changed, probably when the pedals were added so that all the stop knobs would match. Factory-made oblique face knobs from the turn of the century were used, and the labels displayed late nineteenth-century stop nomenclature. There is no sign of previous stop labels on the stop jamb fronts, so any original labels probably were on the knob faces.

Four wooden stop trees from the console and the original bottom board of the windchest pallet box are also extant from the Bachman organ. The latter is a particularly fortuitous artifact as it definitively displays the channel center spacing of the original windchest channels. The order of the channels on the windchest can be deduced from the pallet box bottom together with the corresponding façade pipes (the order for which were numbered). A total of 82 metal pipes are preserved, including all 29 of the original façade pipes. The 15 lowest pipes (C-d) of the Principal Octav 4’ are displayed in the three rounded towers, and 14 pipes (ds-e’) of the Principal Dulcis 8’ in the two flat fields of pipes. The organ originally had just over 500 pipes.

The Reconstruction
St. John’s English Lutheran Church in Tacoma merged with Our Savior's Lutheran in 1932 and became Luther Memorial Church. Dwindling membership caused the church to close in 2004 and at that time the Bachman organ parts were removed to storage at the Paul Fritts organ shop. Since then, the organ has been thoroughly researched. Plans for its reconstruction were carefully developed from the existing parts and available historical information.

As originally built, the organ had much in common with the 1802 Tannenberg organ at Hebron Lutheran Church in Madison, Virginia, which is one of the best preserved of the Tannenberg organs. The façade proportions and other measurements and the layouts of the two organs are very similar as are the windchest and rollerboard layouts. Since Bachman inherited Tannenberg’s organbuilding papers, it is quite likely that the organ was built using Tannenberg’s drawings for the Madison organ as the starting point. For that reason, the largely unaltered Madison Tannenberg provides a valuable model for the missing parts of the Bachman organ. There were only two significant differences in the organs: Madison had its keydesk built into the lower case while the Bachman organ had a separate detached and reversed console; and the Bachman organ has a third 8’ stop, a Quintadena 8’, where the Madison organ had a Terz.

Insofar as possible, all of the original pieces of the Bachman organ have been restored and used in the reconstructed instrument including the gilded pipe shades. The organ almost certainly did not originally have pedals although a pedal keyboard and one stop of pipes were added to the organ at some point – reportedly when the organ was originally installed in Tacoma. That pedalboard with a compass of 18 notes (C-f) has been preserved. This pedalboard seems to be older than 1908 but is in good condition. Its small compass would have been a limitation for the restored and reconstructed organ so it was used as a model for a new 27-note (C-d’) pedalboard. The 1800 Salem Tannenberg already had a 25-note pedalboard, so 27 notes was deemed to be a suitable compass for an organ built 20 years later. The organ has been reconstructed with the 27-note pedal and wooden Subbass 16’ and also has a Manual to Pedal coupler. These additions do not affect the original portion of the organ related to the single keyboard, which can be authentically represented by playing on the manual alone. As it stands today, the disposition is as follows:

Before beginning the reconstruction, the pedigree of the organ and the quality of its extant parts alone set hopes high for the outcome of its reconstruction. Now complete, the visual and musical results have far exceeded all expectations. The organ has a special “old” sound that is hard to obtain and difficult to describe with words. The extant façade and interior pipework has influenced the voicing of the new pipework which matches the original pipes in alloys, scaling and construction. The missing wooden Gedackt 8’ and Flauta 4’ pipes use the Madison Tannenberg organ as models for scaling and voicing. Key and stop actions and winding system components are also historically accurate and provide an authentic experience of playing an antique American-built organ.

As the reconstruction was finished recently, there have been no professional recordings made of the instrument. However, here are some improvised demonstrations by Erik McLeod. To begin, here is the plenum — Principal 8', Octav 4', Quinte 3', Oktav 2', Mixture II–III:

The reconstructed Quintadena 8' and Fluta 4' using Tannenberg's instruments as a model:

Erik McLeod: Improvisation on the flutes.

To end, here is a typical registration for playing hymns — Principal 8', Octav 4', Quinte 3'; after the pause, the Octav 2' is added:

The organ represents a unique portion of American organbuilding and is the sole remaining example of Bachman’s organbuilding. The preserved parts constitute the oldest extant organ remnants in the state of Washington. The restored and reconstructed organ is believed to represent accurately the tonal and physical characteristics of an early nineteenth century American-built organ, and is presently at the Paul Fritts & Co. workshop.

Acknowledgements
Archives of the Moravian Church and Moravian Music Foundation and MESDA in Salem, North Carolina (with thanks to Curator Paula Locklair).

Bruce Shull's thorough study and documentation of the nine extant Tannenberg organs (in particular the 1802 organ at Hebron Lutheran Church in Madison, Virginia) over a number of years during maintenance and other visits, and assisted on later trips by Robbie Lawson.

Bruce Shull, an Ohio native, apprenticed as an organbuilder with John Brombaugh & Co. in Middletown, Ohio. He graduated Oberlin Conservatory of Music in 1977 where he studied organ with William Porter. From 1977 until 1981 he operated his own business as Shull Organbuilders in Charleston, West Virginia. He joined Taylor and Boody in 1981 where his major work was in voicing and design. He was manager for several projects including the resuscitation and complete restoration of the 1800 Tannnenberg organ in Winston-Salem, North Carolina with his account of the process published in Splendid Service, The Restoration of David Tannenberg’s Home Moravian Church Organ. He has authored articles appearing in The Organ Yearbook and the International Society of Organbuilders Journal. He has extensively studied and practiced reed and flue pipe scaling and voicing. In 2005, he relocated to the Pacific Northwest where he works with Paul Fritts & Co. Organbuilders in Tacoma, Washington. He enjoys flying as a hobby and is a licensed private pilot.