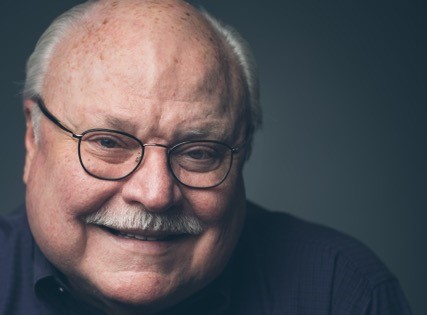 David Ashley White, notable American church music composer and Professor of Composition and Theory at the University of Houston, discusses the craft of composition, his organ works, and the commissioning process with Vox Humana Editor Christopher Holman.

Professor White, many thanks for agreeing to this interview. To begin, could you talk about your musical training? How did you get interested in music, and how did you become a composer?

I don’t think my story is all that unusual, but there was one opportunity that happened when I was young that was transforming. Growing up in South Texas, I always took piano lessons, beginning in the second grade. I composed small piano pieces along the way, keeping them in my “repertoire,” but never writing them down — I guess I had a good enough memory. Finally, while in high school, I began studying piano, music theory, and solfege with Prof. Eugene Bonelli in the Prep School at Del Mar College in Corpus Christi. Working with Gene changed my life — there’s no other way to describe it! Gene’s career was impressive: he quickly went into music administration and eventually became dean of the Meadows School of the Arts at Southern Methodist University, followed by a number of years as president of the Dallas Symphony. His following that path eventually played into my decision to become director of the Moores School of Music. However, he did not want me to pursue composition until I had a thorough background in music theory, which was a wise recommendation. This experience laid a strong foundation for my future studies.

Philosophically, what is “composition”? To compose music, do you think it is necessary to play an instrument or sing, or is theoretical knowledge and creativity enough?

“Composition” is the process of being creative, imagining what notes will sound like on the page and putting them there. It is hard work — composing does not happen as some dramatic act like you might see in the movies. It is a craft, and I believe that that word, “craft”, is a valid and important way to describe what we composers do. One must have a set of skills. I believe that, in order to put notes on the page (I still do that the old-fashioned way, with pencil and paper!), a composer needs to have had experience as a practicing musician. I feel fortunate not only to have studied piano, but oboe (my undergraduate major), and I have no doubt that the lyrical nature of that instrument’s repertoire has affected my work. In addition, I sang in choirs for many years, and I constantly sing what I’m working on. I have never studied organ, although kind organists have often assumed I have.

When you begin to write a piece of music, where do you start? How do you come up with musical ideas?

I first consider the group or individual for whom I’m composing the piece. If it’s for a choir, it could be a professional group, a fine amateur church choir, or a very amateur choir that would require mostly unison lines. My compositional decisions are always based on what works best for the particular group I have in mind — only a few times have I made a major miscalculation, which meant I overestimated what a group could do. After addressing these considerations, and if it is a choral work that’s the project at hand, I determine what the text is, sometimes in consultation with the group for whom I am composing the music. Most of the time, I will suggest a text, in keeping with the purpose of the piece. Then come decisions as to the musical style. Composing must consist of making choices, narrowing down all the possibilities. It was Stravinsky who wrote about initially setting limits, and from this process would come the greatest freedom. I believe that is absolutely true!

In your organ works, do you generally have any particular instrument (or style of organ — American eclectic, historically-informed, etc.) in mind?

The reality today is that the instrument for which one composes might very well be one with mechanical action. In such a case, the composer needs to think carefully about changes in registration — in practical terms, this needs to be built into the music. A few years ago, I composed an organ piece that, while not really planned for mechanical action instruments, was frequently played on them. A few years afterwards, I heard the piece performed on a large and rather dramatic electro-pneumatic action organ, and I must admit that it was as though the “veil had been lifted.” I heard subtleties that I’d not heard before. But don’t get me wrong, I have a great appreciation for mechanical action.

Many church musicians will go through the commissioning process at some point during their careers. How does one hoping to commission a piece of music start? What can a patron individual or organization do to help the composer, and when is it time to get out of the way?

I believe the commissioning process is exciting, and it’s wonderful when an individual or group comes to the realization that a special occasion can best be celebrated by having a new work created. The first step is basic — those commissioning the piece must come to the table with a clear idea about their purpose (a typical reason for a commission is to honor a church musician or to celebrate an anniversary of a church). Then the composer should enter the picture — and composers are chosen in various ways, sometimes because of their reputation or from recommendations made by others. The composer should listen carefully to the commissioner(s), with the aim of understanding fully what the hoped-for piece should accomplish. If a text is involved, it needs to be agreeable to everyone. I will often suggest a text, sometimes one by a living writer. I love working with words, and I am very particular about what I set. That said, my experiences with deciding on a text have always been negotiated in an amicable manner.

After a composer delivers a draft of the commission to the patron, is there room for revisions, and if so, how are they negotiated?

Of course, there’s room for revisions, and everyone must always be honest about any reservations or concerns. But, I’ve never been asked to make any revisions — it has never come up.

How does one publish a new composition?

This is not an easy question to answer — the world of music publication is currently facing new realities and challenges, brought about by all kinds of reasons, including a changing marketplace. But in terms of what I have experienced over the years, this has been the process: the composer submits a piece to a publishing company for consideration. (It’s important for the composer to know the typical kinds of music various publishers publish. For example, it would be a waste of time to send an anthem to a publisher that has no history of handling music of this kind.) After a submission is made, the publisher, within a period of time that varies greatly, makes a decision about whether to publish the piece. A negative decision often has nothing to do with the quality of the work, but rather, everything to do with practicality — maybe there is no need in the publisher’s current catalog for another Christmas piece. Of course, if the composer’s work is accepted, it will usually take time to be released.

It is important to stress that many composers today self-publish their own music, thanks to very sophisticated musical engraving software. This includes many of today’s very successful and well-known composers — they have elected not to deal with a traditional music publisher, but to produce and distribute their own music. I believe I am part of the last generation of composers who still have a relationship with publishing companies. I feel very fortunate.

You taught composition at the University of Houston for many years. Are most composition students hoping to be full-time composers, or will they pursue careers teaching?

It is the rare composer of sacred or concert music who could expect to earn a living strictly from composing. The composers whom I know personally either teach in a university or are employed by a church. I know there are others who have various day jobs to support their “habit” of composing.

What are your current composition projects?

I am currently working on a setting of a Wordsworth poem for SSAATTBB. I have a viola and piano piece on my list, as well I as other projects. This morning in church, two sentences from the Collect caught my attention, and I think they would make a nice short motet. I also have a CD in progress, comprising some of my secular music. I’d like to call your attention to a fairly recent CD of my music on the Gothic label, So the Night Fall (available here), with music for Choral Evensong and Concert. Evensong is my “desert island” service, a tradition that comprises such monumental music that has been composed over the centuries.

's secular and sacred compositions are widely performed and published, and he has received numerous commissions from various organizations, schools, churches, and individuals. His vocal and instrumental music is recorded on several labels, including Zephyr—Echoes from the American Cathedral, a selection of White’s sacred music, sung by the St. Paul’s Choir, Houston, and The Blue Estuaries, which features his choral suite by the same name, commissioned and performed by the Houston Chamber Choir. On the Gothic label is Praise the Spirit, sung by the Palmer Church Choir, Houston, containing a number of White’s anthems, motets, service music, and hymns. And most recently, on the Albany label, is As you set out for Ithaka (2013), a selection of White’s secular music, comprising works for chorus, solo voice, solo piano, and chamber groups.

White’s hymns are found in a number of books, including the Episcopal Church’s The Hymnal 1982 and its supplement, Wonder, Love, and Praise; The United Methodist Hymnal and its supplement; the hymnal of the United Church of Christ in Japan; Great Britain’s Worship Songs Ancient and Modern, and Glory to God: The Presbyterian Hymnal (2013). Also, three collections of his hymns are published by Selah Publishing Co., Pittsburgh, PA: Sing, My Soul: The Hymns of David Ashley White (1996), Songs for a New Creation (2002), and New Harmony: A Harp of Thousand Strings (2006).

White holds a Bachelor of Music in oboe performance and a Master of Music in composition, both from the University of Houston, and he earned the Doctor of Musical Arts from The University of Texas at Austin. He has been been on the faculty of the Moores School of Music since 1977. From 1999–2014, White was the school’s director and was the first recipient of the Margaret M. Alkek and Margaret Alkek Williams Endowed Chair.